According to Nick from evenbalance, he sent BF4DB an email requesting evidence that punkbuster was throwing false positives.

Did you all ever receive that email from him?

Hello, I noticed the following player has 2 "claimed" accounts, one of which is bf4db banned.

I know bf4db has new policies for hacked accounts, but I can't see that info on my end.

Hello, this is in regards to the appeal located here - https://bf4db.com/forum/thread/ban-appeal-6516

I am not an admin and cannot respond to this case, but thought I would leave some additional info if needed. If it is not needed, then kindly ignore this message and I apologize for the unnecessary thread.

Multiple VAC bans for this player on record- https://steamcommunity.com/id/Reformstiny

A video of him discussing cheating and saying he still has the urge to do so- https://www.youtube.com/watch?v=-rmyADDZt3g&ab_channel=convolkjt%27abductkaz%27

Just some food for thought while he is "editing" his BF4 videos for his ban appeal.

Question About Suspicious Video 2 years ago

Hello, below I am going to link to a video used in a recent report for a player that was set to clean.

This thread is not to dispute the decision of the moderator, it is to gather information so myself and others can make more informed decisions in the future when uploading videos.

How is the action performed in this video possible? It is in a server with no mini map, no scope through the trees with an LMG to an enemy that to my untrained eye shouldn't be visible from there, and even if so he manages to hipfire him in the complete blindness?

Again, I emphasize I am not formally disputing the decision here, I am merely trying to understand better what you all look for so we all can determine if a video is suitable to upload as proof or not. Thank you for your time.

The craziness happens at the 20 second mark. I tried timestamping it to the correct time but it keeps starting at the end of the video.

I don't have the time stamps of the use from each account, it just shows they all played from the same IP.

I also don't know that if this is a VPN, if you all ban certain VPN ips that have been serial abusers.

So this process is part information gathering too even if this isn't a positive linked account.

Thank you all for your time and your service.

However, I did have a question about linking accounts.

I just subscribed to patreon for BF4DB (and suggest all you do as well), and this allows the subscriber to see "linked accounts".

The player I wanted to look up though had maybe 25 "linked accounts" listed under the admin tab, and it seems unlikely all of these are actually him.

Several of those "linked accounts" were banned, but I don't have any further info beyond what I see on the page so I don't know if these are valid links or not.

I don't want to make 20 unfounded reports, so I wanted to ask first.

Are the "linked accounts" under the admin tab on bf4db grounds for a ban?

Moral Imperative of BF4DB 2 years ago

This is in reference to the following appeal - https://bf4db.com/forum/thread/ban-appeal-phatchingchong-5325

The alleged in question states that yes, he can in fact replicate the battlereports that got him banned.

However, he can only do so "if he goes back to smoking meth".

We are in a bit of a quagmire here, aren't we?

For the record, I do believe he can replicate those reports with some crystal and a pipe.

But as a recovering addict myself, with three days sobriety, I can't in good conscience ask any other players to engage in such activities just to get some gameplay.

So good on you BF4DB for refusing his request to buy the Walter White Blue and stay awake for three days. There are some things more important than a successful ban appeal.

Thank you for your service to the community and refined moral compass while navigating this case.

An admin said "To everyone who feels the need to express their opinion regarding untaso or any other cases - make a forum thread in another subsection of the website and discuss it freely there."

Here is the evidence in question - https://youtu.be/Um3wjcznd5c

I noticed some members had posts from that appeal that were deleted. I wanted to create this thread to allow for discussion on this case without violating the rules of BF4DB.

It seems to me that there are only two options here.

Either he recorded himself cheating and then uploaded it to his public youtube channel.

Or as he contends, he edited the video and processed it in such a way to make himself appear to be cheating.

Keectuan or others, what are your thoughts on this case?

The reason given was "As we are not able to confirm PunkBuster violations or valid PunkBuster Screenshots that have only been logged on ACI we are discontinuing ACI data as valid evidence to base reports and bans on."

Since that time though, new admins have been added to BF4DB who I know for a fact have access to ACI (I won't name them for obvious reasons).

There are several players I am confident are cheating, but the only evidence I have are (very old) ACI PB violations.

BF4DB also said "We are open minded about this suspension and will consider revoking it if we receive basic permissions over at ACI allowing us to at least validate reports that have been made based on evidence only hosted on ACI."

Since some admins still have access there and can verify the PB violations, is this something open for discussion as primary evidence?

Not trying to get into the whole BF4DB vs ACI argument, I am simply trying to catch as many cheaters as possible.

Thank you all here at BF4DB for your continued volunteer efforts to keep the game clean.

How does spectator mode work? 2 years ago

In the above link, the player in question seems to be killing lots of players he isn't actually hitting according to what the spectator sees.

My question - if this is clean, then how can a user such as myself determine whether this is a spectator glitch or the person is actually using software to register non hits as hits?

May I please have the battlelog ID of this virtual machine from you, Sovereign Skies?

I am in direct contact with Nick from evenbalance and he is very curious as to how this happened.

Who knows? He might give a nugget of useful information for you all as well.

We provided information to Evenbalance years ago and they didn’t care then, and they certainly don’t care now.

To answer the other question, if you had a brand new account, installed PB, and then cheats, but never played the game, you wouldn’t trigger anything since you’re not joining a PB enabled server.

Thank you for your response. Is the above account PLD etc etc the one you are referring to? I have an ongoing dialogue with Nick from PB and would like to present this evidence to him directly. If this is not the correct account, would you mind sharing with me the account you are referring to? Just trying to get to the bottom of this. 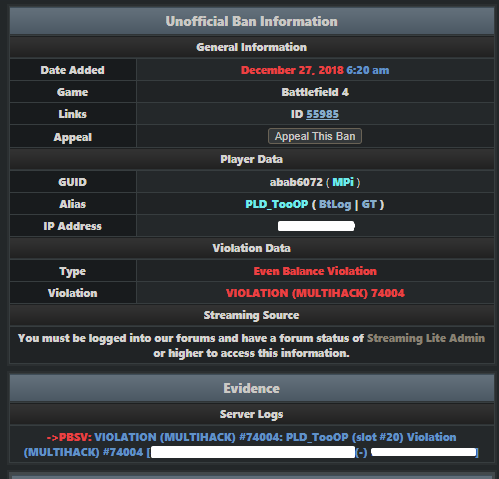 How someone will trust an anti-cheat that banned an account with a total of 0 kill?

Just for the sake of argument, if someone never played the game but downloaded punkbuster and had cheat software, would they be banned? I am not saying that account is cheating, I am just trying to look at this from all sides. Thank you for your response, I encourage more information like this.

"We have received conclusive evidence that proves Punkbuster is issuing erroneous violations on innocent players who just want to play the game."

Apparently Nick from evenbalance has emailed BF4DB about this conclusive evidence, just wondering how that went or if BF4DB responded to him.

According to Nick from evenbalance, he sent BF4DB an email requesting evidence that punkbuster was throwing false positives.

Did you all ever receive that email from him?

BF4DB plugin does not seem to kick 1 year ago

sure. as soon as you disable phone verifcation.

not trying to giveaway my personal information to the CPP.

if you can't do that... then i will wait here patiently.

I just disabled phone verification on discord. You should be good to go.
And I'll assume you meant CCP, not CPP, smarty pants.
So let me get this straight, you set your server to official and then switch to ranked every time a hacker joins?
Do you see why this half-scrambled idea would result in errors with the plugin?

Read that message to your kids.

How long is the band 1 year ago

I'm going to overrule the rest of the staff here.

Sorry for the confusion.

I remember my first time being day drunk too.

First of all, don't put something I didn't say in quotes. That isn't how that works.

Secondly, it took me 15 seconds to find a thread that directly contradicts what you just said.

"If someone has multiple accounts of which one is banned by us for cheating, we will ban all the other accounts owned by him." -bf4db admin