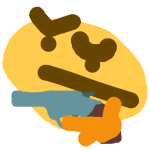 All rounds are in 100HP servers. Just include some of the battlereports of him cheating.

I just notice that the stats of RPK are not shown in WEAPON STATS on the player page.

Apparenly judging from my former report, he was labeled as CLEAN.

Maybe the BF4Cheatreport and BF4DB snapshot are not convincing enough with most of the battlereports showing that he's using sniper.

So here's some specific battlereports when he didn't use sniper rifles.

And he was very bad with sniper and assualt rifle in January 2018.

And in February he suddenly got gud.

There are plenty of other sniper battlereports to compare with. A little weird if you ask me.

Technically nobody is allowed to post in a report thread so I create a new thread here.

First of all, just a quick reminder for pinger15234 that it doesn't matter where did you get banned. Your DMG on Bulldog is suspiciously high even on the condition of Hardcore players. I guess that's the reason for triggering the plugins the server is using and that's why you only got banned for only 90 seconds because it's done by the plugins automatically.

And second, you are not banned on BF4DB (at least at this moment), so there is nothing BF4DB can do. If you got banned permanently by the server you mentioned, what you should do is to contact the admins of that server.

Last but no least, yes, the suspicious battlereport I mentioned is not the one that matters in your opinion, but that is a undoubtedly suspicous battlereports and I just decided to point it out.

And it's time for the analysis.

1.As I mentioned, it's weird that none of the bullets you fired hit a target but you got 44 kills with Bulldog. I'm not quite sure how the bullets register as a 'hit' in BF4, but I'll assume that if you shoot a explosive barrel / C4 / something that blows up after getting shot and kill someone with the explosion the bullet triggers, the game won't count that as a hit but you gain a kill. But since all 3 of the players were using the assault kit, there's no C4 to shoot at. And i don't think there are more than 100 barrels to blow up on the map Rogue Transmission. Maybe there are some levolutions that kill on that map and you can kill someone with them repetitively, but those kills won't count as weapon kills, like the pipes that cause fire on the map Operation Locker.

2.And if you check the stats of the other two people in that server, we have another suspicious guy Wolf_Infinity that has the same kind of suspicious stats. He fired 114 bullets and none of them hit anything, but he got 30 kills. Maybe there's something wrong with the server, but hey, the final guy sundrax got a 'normal' stats.

3.According to the stats of this battlereport, I think there was some stat-padding going on in that round:

(2) Let's pretent all your 60 shots hit. And in Hardcore mode you can one shot someone with Bulldog by performing a headshot or the enemy is already injured because of falling damage. So what's the possiblity of killing 44 people with 60 bullets during a normal gameplay? Not to mention none of the bullets hit.

(3) You got 8 assault rifle ribbons and 1 pistol ribbon. That's 48 kills Bulldog and 4 with M1911 (judging from the service star you got). Again, you need to hit something to get the extra 4 Bulldog "ASSISTED COUNT AS KILL" to earn the 8th ribbon and 2 extra to get 54 kills.

So in conclusion this was a mysterious round that people were stat-padding without hitting any bullets or losing any tickets. Maybe I miss something here and there but it's suspicious enough for me to report it. Let the admins decide if all three of them in this round should be banned or investigated.

How long is the band 4 months ago

Ok so did you cheat?

A bit off from his former stats but still needs a bit of monitoring. Thanks for the report anyway.

I did not cheat 6 months ago

That's a server side ban using BF4DB as its evidence. I don't know where they get the fact that you got banned by BF4DB but I can tell you that you are NOT banned here. Contact the server admin for help.

Feel free to collect sufficient evidence and report this guy by yourself since he is not yet reported.

No one has been banned for high accuracy on Phantom Bow. If anything, Phantom Bow poison tip makes you get less DMG, not more.

Darn it I'm getting old.

Picking up a cheater's kit for 5 rounds on 2 different days isn't normally defined as ONCE.

I didn't see the "squad" that were "killing each other" since you are the only one getting high HSKR in these battlereports of normal rounds.

Hmm I honestly can't remember why did I ban you in the first place. I guess it's a mistake on my end. Sorry for the inconvenience.